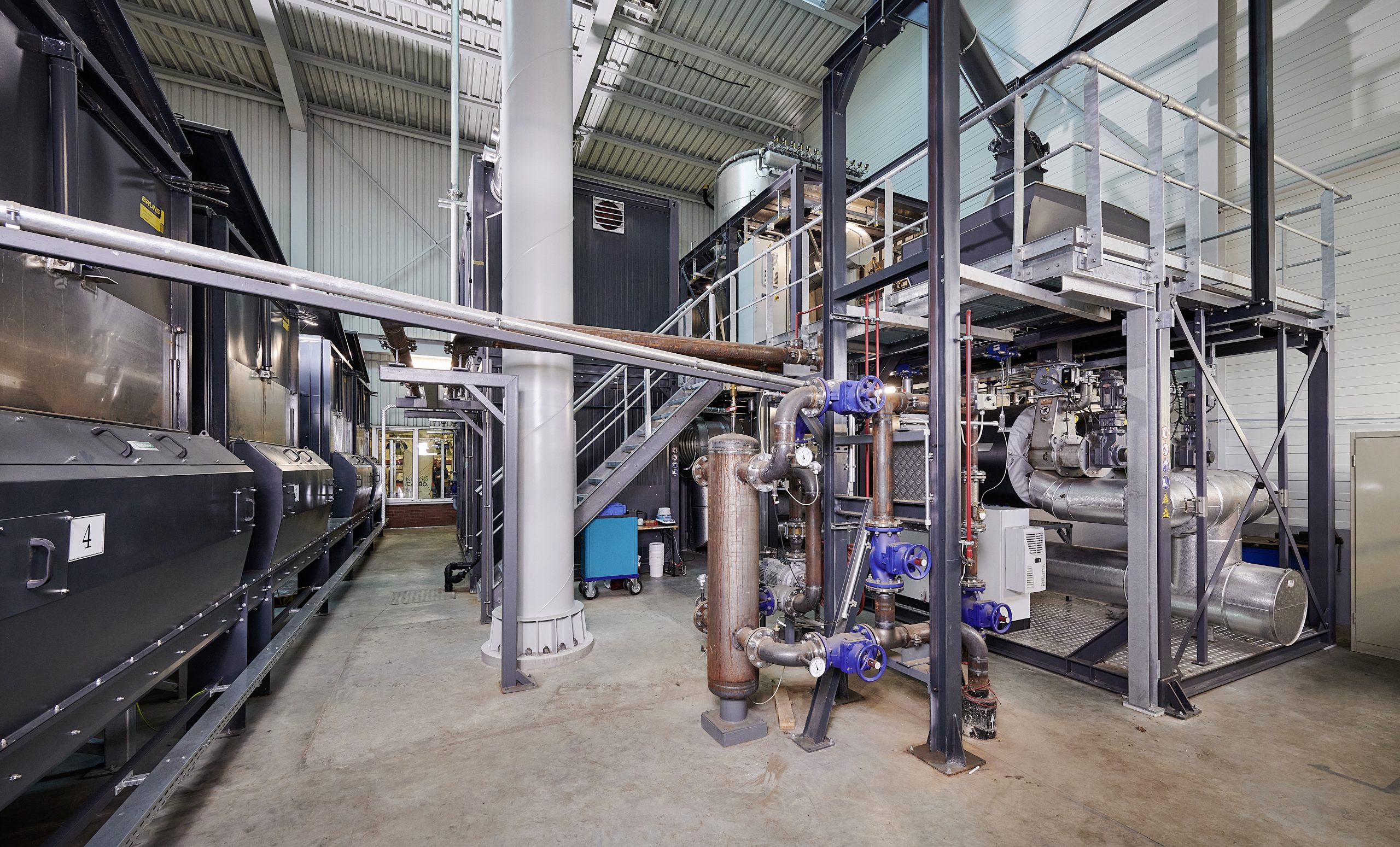 How can an industrial giant like thyssenkrupp switch almost half of its on-site heat demand from fossil fuels to green heat generation in a very short time? Thanks to Novocarbo’s biochar production, which on top of that removes CO₂ from the atmosphere.

As a carbon removal company, our mission is to remove as much CO₂ as possible from the atmosphere in order to achieve the important goal of a maximum of 1.5 degrees of global warming. This is made possible by our products: biochar, green heat and carbon removal certificates. We produce these in so-called carbon removal parks: by using state-of-the-art pyrolysis plants, we process biomass into biochar, in which the CO₂ from the plant residues is permanently stored. Therefore, we can generate carbon removal certificates that companies can purchase. The pyrolysis process also generates climate-neutral, regenerative surplus energy, which we make available, for example, as part of “heat-as-a-service”-partnerships: on average, our parks can generate 18,000 MWh of green heat annually.

We build our sites in cooperation with municipal utilities or at companies that want to feed the green heat into their heating network. This is also the case at thyssenkrupp rothe erde in Lippstadt, where we have been operating a biochar production site since November 2022 using the PX 1500 pyrolysis plant from PYREG. “We cover around 40 per cent of the heat demand at the site in Lippstadt with the green heat produced,” explains Natallia Schönnagel, Head of Technical Coordination & Operational Excellence at thyssenkrupp rothe erde Germany.

Apart from occasional maintenance stops, the pyrolysis plant runs 24 hours a day, 7 days a week, and thus achieves up to 8,000 operating hours a year. “This allows us to replace about 3,500 MWh of fossil fuel per year with climate-neutral heat,” says Schönnagel. This also avoids possible CO₂ taxes and associated costs, for example. The heat generated is fed into the heating circuit at thyssenkrupp rothe erde in the form of hot water and used to heat offices and production halls as well as shower water in the staff rooms. And that’s not all: since the heat demand at the site is lower in summer, there are concrete plans to pass on the climate-neutral surplus heat to a neighbouring company.

Caspar von Ziegner (CEO Novocarbo, 2nd from left) and Natallia Schönnagel (thyssenkrupp rothe erde, 3rd from left) together with representatives from thyssenkrupp and PYREG in front of the pyrolysis plant in Lippstadt, Germany.

In general, the possibilities for using the climate-neutral heat are diverse: in addition to hot water, as at thyssenkrupp, it can also be made available as warm water or process steam. As part of a heat-as-a-service-partnership, we at Novocarbo work together with companies or municipal utilities to develop a concept for the best possible use of heat.

The biomass from which the heat is extracted during pyrolysis can be of various origins. In Lippstadt, among other things, leftovers from the timber carpentry of thyssenkrupp rothe erde are used, because the ball bearings for the wind turbines are packed here in specially carpentered wooden boxes. Novocarbo takes care of the ongoing supply of biomass and, if necessary, buys suitable plant residues regionally. In Lippstadt, for example, waste wood and roadside greenery are also recycled. Novocarbo only uses residual materials that would otherwise be of no use. 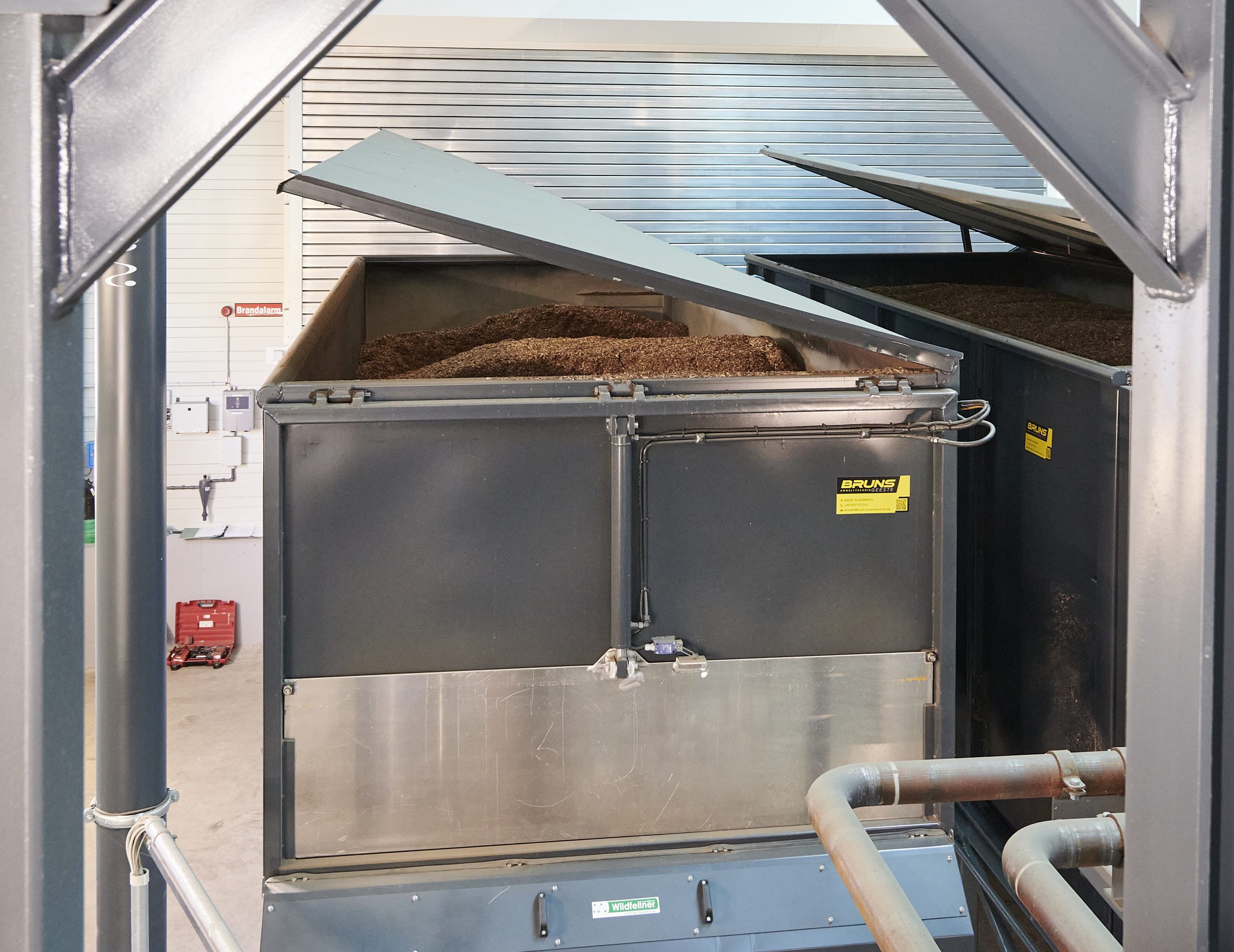 Novocarbo takes care of the ongoing supply of biomass, like waste wood or roadside greenery.

Decarbonization is an important step towards climate neutrality

The successful use of pyrolysis technology and biochar production at thyssenkrupp rothe erde shows how the conversion from fossil fuels to climate-neutral heat generation can succeed smoothly. The importance of this is demonstrated by figures from the International Energy Agency (IEA): In heat generation in particular, the share of fossil fuels is still far too high worldwide. Renewable energies so far account for only 11% of the global and 19.5% of the German heat supply.

Thyssenkrupp rothe erde is using the pyrolysis plant as part of its set climate targets to reduce CO₂ emissions from scope 1, i.e. emissions directly caused by production. “We are pleased to be moving a step closer to our goal of climate neutrality thanks to our collaboration with Novocarbo,” emphasizes Natallia Schönnagel. The more companies with high emissions rely on green heating solutions, the better for the climate! At Novocarbo, we are happy to make our contribution with our heat-as-a-service-solution and help interested companies implement their decarbonization plans.